Take the rest of the day off

You listened…you did it…and it worked.

Over a decade ago, I investigated why donors stop giving to not-for-profits after making only one or two contributions. Donors in the first two studies I conducted in the United States and Canada told me: If fundraisers acknowledge our contributions promptly and meaningfully when we give, if they assign our gifts to something specific, and if they report on what has been accomplished before asking us to give again, we will stay loyal and our future donations will be more generous.

I published this straight-forward solution to high donor attrition in Donor-Centered Fundraising. This year, I went back to donors to ask them what has changed. A lot, it seems.

→ You’re getting thank you letters out faster. As a matter of fact, you’ve become so efficient that a two-week turnaround (two days for electronic thank yous) is now considered by donors to be the new industry standard. Well done!

→ Those thank you calls you’ve been making — donors have noticed – including when you leave voicemails — and your efforts are really paying off. 34% of donors who received a personal thank you call said they gave again because of the call.

→ And, Donor Recognition Events that take so much time and effort — they are definitely worth every creative moment you put into them. A remarkable 87% of donors who have attended a recent Donor Recognition Event have either already given or plan to give when asked by the host not-for-profit largely because of their positive Event experience.

Two things still exasperate donors, however, and they are the main reasons why attrition is still much too high. Over-soliciting and insisting on unrestricted gifts are largely why 65% of donors who make a first gift never make a second and why 90% or more donors who start giving are gone within five subsequent appeals. These problems are as frustrating for fundraisers as they are for donors because they are under pressure to ask too often and talk in general, rather than specific, terms about what happens with the money that donors give. Most fundraisers know they could make much more of it if top decision-makers had a better grasp on donor motivation and strategic alternatives to bombarding donors with frenetic appeals.

The researcher in me is fascinated by the numbers, whether or not they reflect the movement of fundraising in a positive direction. But, as the person who has been hauling myself and those numbers from city to city for the last fifteen years, I am very gratified. Everywhere I go, I have had (and continue to have) the privilege of interacting with professional fundraisers who already raise billions of dollars yet still strive to do better. Well, according to donors, you are doing better. Nicely done. Take the rest of the day off.

About
Penelope Burk
A renowned author and researcher, Penelope Burk is President of Cygnus Applied Research, Inc., a Chicago-based firm that specializes in conducting research with donors on what they need from not-for-profits they support. Her seminal book, Donor-Centered Fundraising, is the authoritative text on how to sustain donor loyalty and win increasingly generous gifts. Penelope is also the author of the annual Burk Donor Survey which measures how donors are managing their philanthropy in changing times. For more information on her company, its donor research and services click here. 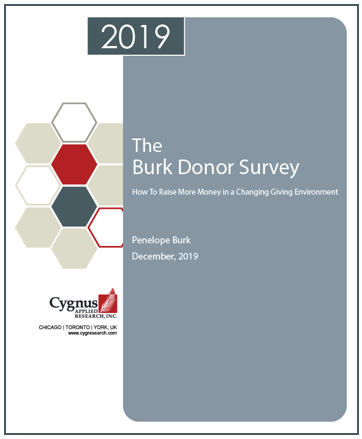